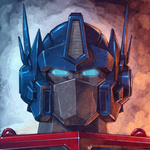 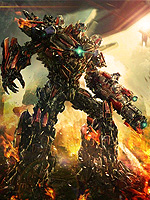 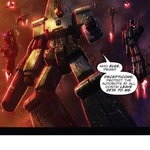 
Rollin out motherfuckers, it's the robots in disguise

Led by Optimus Prime, a bot whose power never dies

They're goin' undercover cause Decepticons don't give a maudit


Autobots, it's time. We're rolling out.


Oh my God, that truck is Optimus, without a doubt!


Yes you are, my dearest robot bro

You guys been on my lunchbox since the 19 fuckin 80s yo!

I think it's time to try to find another way to disappear!

New disguises that our enemies could never recognize

Bumblebee become a burger; Prowl, you are a side of fries!

Jazz, you're now a birthday cake

You've got the touch

I've got the flour!

Let's show em what we're all about

We'll catch em by surprise when we're in disguise

Now the time has come

They better be alert cause we can now convert

To a skirt, polo shirt, and a little mound of wet dirt

As soon as I take on the form of this delightful soufflé!


After hours and hours of transforming into stuff

The Autobots decided on a plan that's super duper tough


Those Deceptidicks won't see us coming at all


Who'd even take to guess

For three dollars less, I said


They could stop Ratchet before, maudite

He's combined with Ironhide to form a turkey sandwich!


And I haven't even mentioned

The ace that's up my sleeve

He rocks a jet engine that'll make your ears bleed

This is your moment

C'mon Starscream, now break it down!


Hey. This is- I'm Starscream.


I just-I just wanted to say that, Megatron, y-


Megatron, you're going down, I'm gonna -


Alright, you know what? Forget it.

Time to do what's right and transform tonight

To five kites, egg whites, and a family of field mice

Are now ten tanks and a giant gun

While Grimlock's a rake and I'm a warm milkshake

There's a small chance that we made a very tiny mistake


Well it's too late now 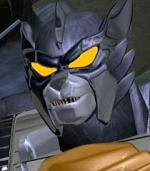 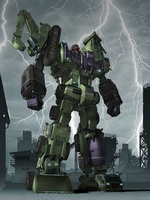